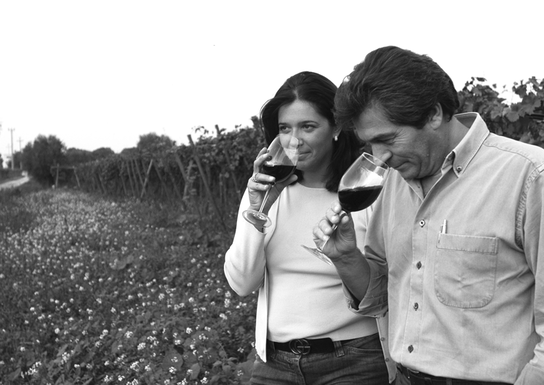 ​Varvaglione 1921 has been making wine for almost one hundred years, spanning four generations of the family. Today, it is one of the biggest and fastest developing companies in Puglia, steadily increasing the number of bottles produced and the quality of its wines. The company is based in Leporano on the Gulf of Taranto, in the famous Salento region.
Experience and tradition have found synergy in the company’s use of innovative winemaking technology.
Over time, the company has combined the traditions of this territory with newer methods. Varvaglione 1921 is continually evolving, keeping an eye on the trends and tastes of the market while never losing sight of the traditions and terroir.
Today the company has three production areas: the winemaking plant and cellar, the bottling site and the shop, which used to be the headquarters of the company.
The feather in the cap today is the Masseria Pizzariello, a traditional Pugliese estate that symbolizes all of the history and way of life that is typical of the warm hospitality in this region.
With a focus on Puglia’s native grape varieties, Varvaglione’s extensive portfolio includes red wines made from Primitivo, Negroamaro, Malvasia Nera and Aglianico grapes and white wines made from Verdeca, Falanghina, Malvasia Bianca and Fiano grapes. Moreover, in the area of international varieties, Varvaglione makes a Chardonnay and a Sauvignon following traditional Salento methods.
Varvaglione 1921 is one of the oldest wineries in Southern Italy. Internationally and nationally recognized with a market presence in over 60 countries, Varvaglione 1921’s wines have won many awards. In 2011 it celebrated its 90th anniversary by launching a special Primitivo cuvée called “Papale Oro”.
The winery owns 150 hectares dedicated to the cultivation of its grapes; additionally, it relies on the collaboration of affiliated local grape-growers who have worked with them for over 30 years.
For quality control and research and development, Varvaglione 1921 is monitored by the University of Udine and the University of Rome Tor Vergata, both of which systematically check quality. Varvaglione 1921 is certified by BRC Certification, IFS International Food Standard, and ISO 22000, ISO 22005, ISO 9001, ISO 14001.
Click here to be directed to the winery website.